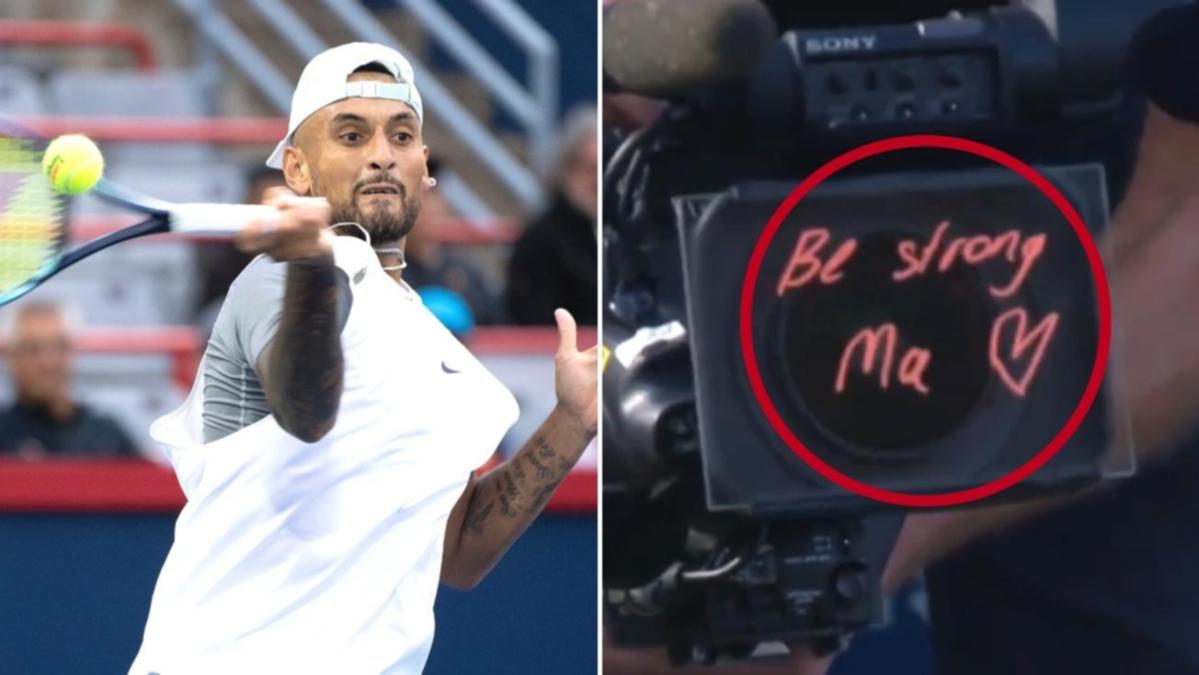 Nick Kyrgios’ latest win over tennis world number one Daniil Medvedev at the Canadian Open in Montreal meant more than just advancing to the next round.

It was the Australian ace’s first victory over a world number one in eight years, following his famous victory over Rafael Nadal in the quarter-finals at Wimbledon in 2014.

More importantly, the victory all but guarantees that the world No. 37’s ranking will climb enough to see him seeded at the next US Open, which begins at the end of this month.

But the most poignant part of his victory was the touching message he sent to his ailing mother afterwards.

Ahead of the stunning win, Kyrgios spoke publicly about the health issues his family is facing and how difficult it is to be away from them.

“It’s difficult because even traveling now, my mum is in hospital at the moment, my dad hasn’t been very well, my brother just had a baby and I can’t be there with my family when normal people would like to be with them,” Kyrgios said.

“It’s hard being from Australia because you can’t come and go.

“There are a lot of things that people don’t see. They only see me winning, losing, throwing a racket, doing those things.

“They don’t really understand the challenges I face or what people on tour face, what’s going on in their personal lives.”

Leaving the pitch after the win, instead of signing his signature on an on-pitch camera lens, Kyrgios wrote a message to his mother.

“Stay strong mom,” he said, accompanied by a heart of love.

The 27-year-old’s blazing form saw him overtake Medvedev and book a date with fellow Australian Alex de Minaur, but not without some typical Kyrgios drama.

The soaked Aussie’s fuse blew repeatedly – again – and he directed blasts at his player box, begging them to give him the optimal reaction after various points.

Despite the outbursts, Kyrgios wore down Medvedev 6-7 (2-7) 6-4 6-2 in a sapping second-round encounter played in scorching heat and humidity.

After losing the first set in a tiebreaker, Kyrgios had to dig deep and turn the game around with an incredible backhand pass to break Medvedev in game six of the deciding set.

He broke the dejected Russian for a second straight service game before closing the match at love after exactly two hours.

The emotional victory was Kyrgios’ third in four encounters with Medvedev and the 14th win in his last 15 games.

“I’ve had success against him in the past and he’s beaten me before, so I feel like we know each other’s games well,” Kyrgios said after the match.

“I’m not the kind of player who goes into these games looking at the ratings or anything like that.

“It’s just who I play against and what type of ball they give me and today I had a very clear goal of how I was going to play – lots of serve and volley, lots of aggressive game from the side. back – and I executed better than him that day.

” That’s all. He won the first set and I feel like I had some opportunities there too, so hopefully I can keep that going.

Kyrgios, who next faces Australian number 1 Alex de Minaur for a place in the quarter-finals, is not getting carried away despite becoming one of the favorites at the US Open after his blowout victory over the champion of Flushing Meadows last year.

“Look, a Grand Slam is very, very different from any other tournament,” he said.

“If I was in this position of a grand slam, you still have to win another set and it’s not easy at all. He’s a machine.

“He’s the best player in the world for a reason and at a Grand Slam he’s a totally different beast.”

Nonetheless, Kyrgios continues to scoff at the rankings and the 27-year-old’s latest triumph has all but secured the Canberran a all-important seed for the New York major from August 29.

“Look, I feel confident in my body and in my mentality for the US Open, but at the same time, there’s so much time between yesterday and today,” Kyrgios said.

“I have to focus on this event and then on Cincinnati. There are so many things I have to hope for. I’m not even going to think about the US Open right now.

De Minaur set up a first encounter with Kyrgios with a 7-6 (7-4) 7-5 second-round victory over Bulgarian Grigor Dimitrov, the 15th seed.

In the video below: Bizarre moment baseball player’s phone falls out of his pocket

Trade talk: The exorbitant price Pies could pay for stars to play elsewhere