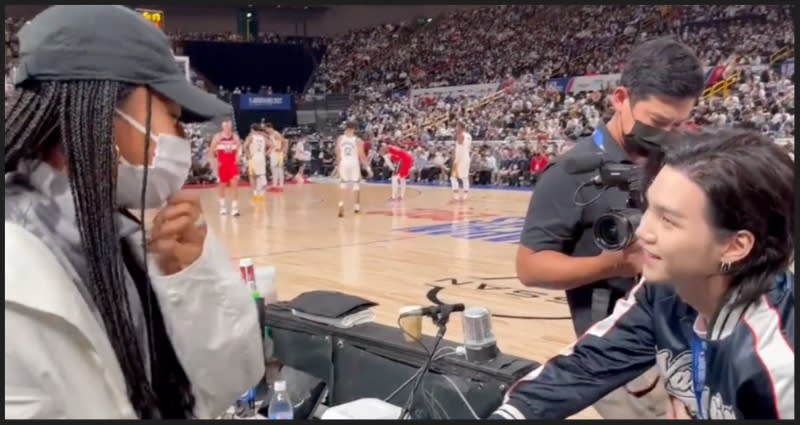 Tennis Olympian Naomi Osaka, who has been in ARMY for years, finally met BTS’ SUGA at an NBA preseason game in Japan.

Osaka said during a 2019 press conference for the Madrid Open, “I got into BIGBANG and 2NE1, especially CL. I don’t know the year, kind of like when ‘Crush’ and all that came out. And then I just saw BTS do a lot of related stuff, so I was like, ‘Who are these kids?’ Then I slowly started getting into it during the “I Need U” era.

That same year, she tweeted her love for the BTS track “Make It Right.” In 2020, she revealed that she runs a BTS fan account called “the free hobi front”. She even listens to BTS while warming up for important matches, just like she did in her 2021 Olympic match against Marketa Vondrousova. Those in attendance noted that Osaka performed “Dream Glow,” the 2019 BTS collaboration track with Charli XCX. She even attended their “Permission to Dance On Stage” concert in Los Angeles.

On Thursday, SUGA joined a Warriors practice session as a special guest at the NBA Japan Games. He watched the first game between the Golden States Warriors and the Washington Wizards and met various players, including the Warriors. star point guard Stephen Curry.

As SUGA sat courtside, so did Osaka. Later, she tweeted that she told him “Autumn Leaves” was a great song.

The ARMY comrades were quick to tweet their support and congratulate Osaka for living the ARMY dream.

In related news, it was announced that K-pop legend BoA will headline the halftime show during Game 2 in Japan between the Warriors and Wizards on October 2.