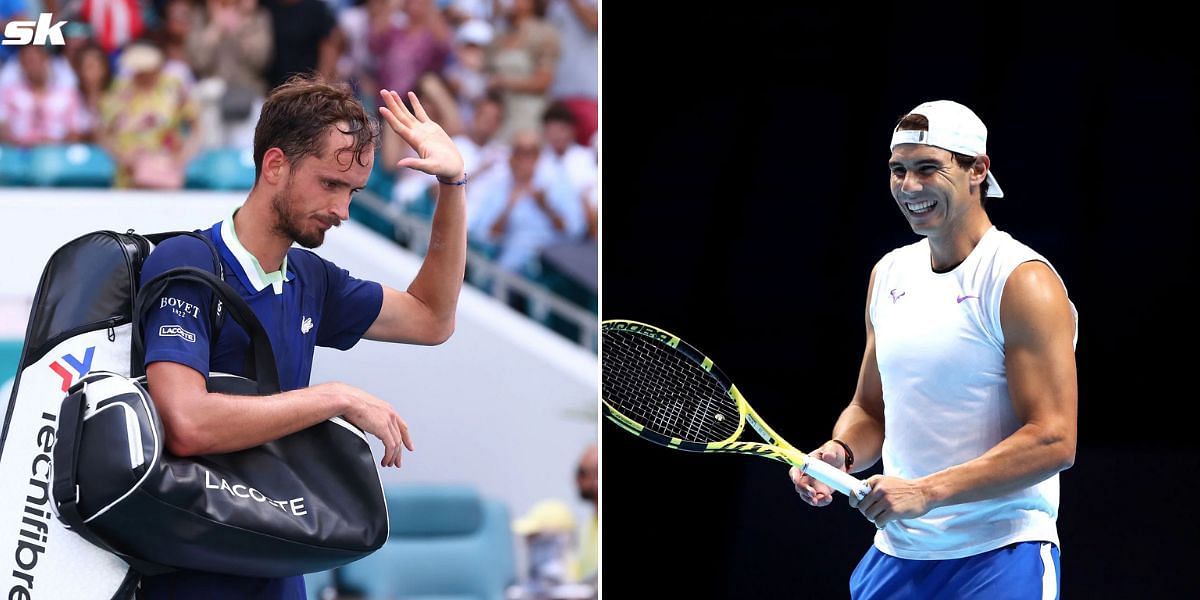 World No. 2 Daniil Medvedev has returned to action after six weeks at the Geneva Open. However, his comeback did not go as planned as he lost to Richard Gasquet in straight sets in the second round.

Rafael Nadal, who is due to arrive in Paris on Wednesday for Roland-Garros, will begin training immediately.

2019 French Open runner-up Marketa Vondrousova will miss the French Open after undergoing wrist surgery. Anastasia Pavlyuchenkova, who was a runner-up in Paris last year, is set to skip the rest of the season, including Roland Garros, due to injury.

The best players, including Naomi Osaka, Maria Sakkari and Jannik Sinner, have already arrived in Paris and started their preparations for Roland-Garros. Here is a summary of today’s news:

2021 US Open champion Daniil Medvedev has returned to the Geneva Open after undergoing hernia surgery a few weeks ago. The top seed received a bye to the second round, where he faced Richard Gasquet.

The opening set was rather one-sided, with Medvedev starting slowly. The Russian also trailed in the second set, but fought back to level the score and push the set to a tie-break.

However, Medvedev fell short, losing 6-2, 7-6 (5). He will now head to Roland Garros without much practice on clay and without any wins on the surface. Medvedev’s win-loss record for 2022 now stands at 16-6.

Rafael Nadal, who is aiming for a 22nd Grand Slam title at Roland-Garros, is expected to arrive in Paris on Wednesday. The Spaniard will get to work straight away as he is scheduled for a training session later in the evening. Nadal will train on the Philippe-Chatrier court at 6 p.m. local time.

Nadal’s foot injury bothered him recently and even led to his early exit from the Italian Open. Nevertheless, he is still determined to try his luck at his most successful Grand Slam tournament.

Marketa Vondrousova, who lost to Ashleigh Barty in the 2019 Roland-Garros final, will not compete in Paris this year. The Czech player, who has struggled with injuries throughout her career, suffered yet another setback. She recently had wrist surgery after suffering for a few weeks and will be out of action for some time.

“Hey guys👋🏻The last few weeks haven’t been easy☹️ I’ve been experiencing recurring pain in my wrist and after seeing a few doctors I decided to have this little surgery to be able to play pain free. Stay positive during recovery and can’t wait to be back on the pitch soon💪🏼🥰🤍”

Vondrousova only participated in one tournament during the clay-court season, the Porsche Grand Prix tennis tournament in Stuttgart. She lost to Ons Jabeur in three sets in the first round.

Anastasia Pavlyuchenkova will be out for the rest of the season

Anastasia Pavlyuchenkova, who reached the French Open final last year, is expected to miss the rest of the season with a lingering injury. She hasn’t competed much this year and suffered every time she took to the field.

The Russian has now decided to take a year off to recover and come back even stronger for next season. Pavlyuchenkova took to Instagram to announce the decision:

“Hi everyone! I am very sad to say that I am forced to withdraw from Roland Garros @rolandgarros and the rest of the tournaments this year! I have been playing this in my head since last week and it was a really difficult decision to take, because Roland Garros has always been very special to me, especially after a dream race last year.”

“But because of the pain for a long time, now the injury limits me physically and mentally to fully compete and train. After rehab for months this year and only played 3 events, the last two tournaments have shown me that the pain I was still there and I wasn’t ready so I decided to take more time and come back stronger next year! Thanks for the support. See you next year!”

Pavlyuchenkova’s best result this year was winning the doubles title alongside Veronika Kudermetova at the Italian Open.

The best players are preparing for Roland-Garros

Many stars have already arrived in Paris and are preparing for Roland-Garros. 2021 semi-finalist Maria Sakkari, former world No. 1 Naomi Osaka, two-time Grand Slam champion Victoria Azarenka and Jannik Sinner were among the players scouted in training on Tuesday.

Also check out:- Results of the French Open 2022