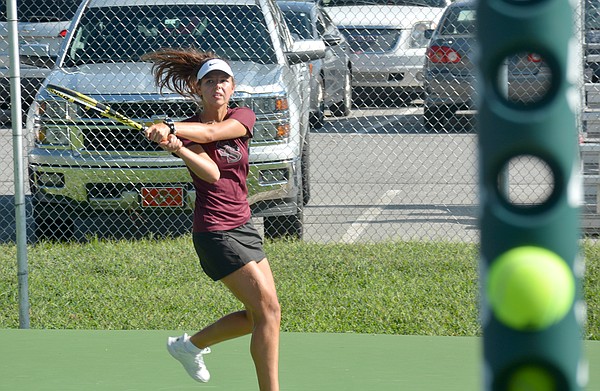 Senior Olha Los won the Class 5A Girls’ Singles Tennis Championship on Tuesday, October 11, to cap off what has been an ultra-successful career at Siloam Springs High School.

“I really worked really hard for this and couldn’t have done it without my brilliant coaches, Coach Kelly (Junkermann) and Coach (Clay) Taylor. I’m just a reflection of all their hard work. hard work and their love for the sport.. I’m proud to represent the Siloam Springs tennis team and I hope more people will be a part of it this year. We are a family and I couldn’t have done it without the support of my teammates. I love tennis and I want to help others develop the same kind of love for her.”

For Los, it’s yet another piece of hardware for the trophy, which already includes a 5A West Conference singles title this fall and a rookie doubles championship with Eve Slater in 2019.

Also included are conference runner-up and third in the state with Slater in 2020 and third overall in singles last year.

But the most recent achievement – a state singles title – is well-deserved according to his manager, who points out that Los have lost all four matches in the past two seasons.

“Olha has shown exceptional dedication and leadership this season,” Siloam Springs coach Clay Taylor said. “She’s been working for years now, perfecting her game and her hard work has paid off. Olha couldn’t be more deserving of the state championship title, and I’m so proud of her for this incredible achievement.”

You could say Los State’s title race began on a hot afternoon in late August when she lost an 8-5 decision to Mountain Home’s Macie Heide on a day when she wasn’t feeling well but that she was always disemboweled during the game.

Los earned a comeback over longtime rival Heide in the 5A-West Conference title match when they beat Heide 6-1, 6-0 to win the 5A-West women’s singles title.

Los went on to win its first three games in the Class 5A state tournament before being matched with Emmory Simmons of Little Rock Parkview in the final, a rematch of last year’s semifinals.

Simmons won the first set of that year’s game 6-2, but Los were leading 2-1 in the second set when Simmons had to withdraw for medical reasons, losing the state championship to Los.

She beat Sydney Turner of Haas Hall Fayetteville 2-6, 6-2, 6-3 in the quarter-finals and advanced to the semi-finals on Tuesday. Results were not available at the time of going to press.