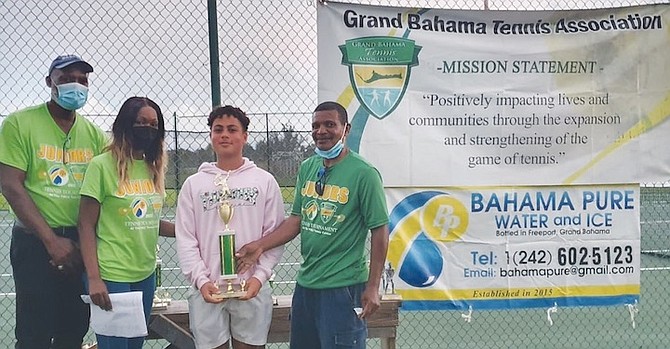 KHAI Rees receives his award from the tournament organizers. 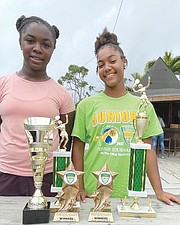 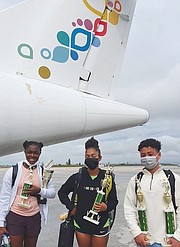 KHAI Rees began the 2022 local amateur campaign as a two-division winner, setting the stage for what he hopes will become a milestone year.

Rees highlighted the winners group of the Bahama Pure Water and Ice Grand Bahama Invitational last weekend by winning the Boys U16 and U18 division titles in Grand Bahama.

The winners of the U12 division were Kayla Fox and Patrick Mactaggart, with Briana Houlgrave and Noah Russell as runners-up.

The U14 division winners were Breann Ferguson and Jackson Mactaggart with Fox and Patrick Mactaggart as runners-up.

Jalisa Clarke won the Girls U16 with Ferguson as runner-up while Jackson Mactaggart was Rees’ runner-up among the boys.

In the U18 division, Sapphire Ferguson won the girls’ title, followed by Clarke while Ian Rolle finished second behind Rees.

In women’s doubles, Sapphire and Breann Ferguson teamed up to defeat Rachel Thompson and Tatyana Madu. Kingston Rees and Patrick Mactaggart won the boys’ doubles against Russell and Keiano Henfield. Rees, a 14-year-old ninth-year student at St Augustine’s College, said his start to the year would be a sign of things to come.

“It was an amazing start to the year. I played well and it was a great experience. I just want to keep that type of play in every tournament this year,” he said. “Winning both divisions is a challenge but the more I can play the better I play in divisions all the time and I’ve really gotten used to it since I was 10 so I’m looking forward to it now .

Since the COVID-19 pandemic halted play locally, Rees said he’s taken advantage of that time spent training and traveling to Florida to compete in a series of tournaments.

He recently qualified for the second round of the L7 KL tournament in West Palm Beach, Florida on January 29.

“I have improved tremendously over this time, training every day, staying attentive to coaches and training with Island Tennis Bahamas,” he said. “It also helps when I travel to play where I can play against a lot of different types of players and a more diverse skill set.”

“His year has started off excellent and we couldn’t be happier with the progress. He got fit and got back in shape fast,” the elder Rees said. “It was disappointing the last few years because there were few opportunities to play in home tournaments or opportunities to get rankings. There doesn’t seem to have been a major effort in this regard and it has hurt a lot of our players, so we’re happy to see them playing competitively again.