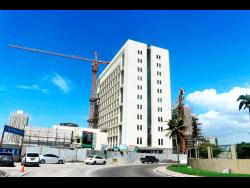 I am grateful to a friend for bringing to my attention China’s donation to the African Union (AU) of a new headquarters in Addis Ababa, completed in 2012. It was fully funded, furnished and equipped, and built by China, and the building – the largest in Addis Ababa – hosts the biannual AU summits.

In January 2018, a report in the African edition of the French newspaper The worldconfirmed by the FinancialTimes of London, claimed that in early 2017 it was discovered that secret microphones, embedded in the walls and furniture of the AU headquarters, were listening to all personal and diplomatic conversations in the building – confidential and otherwise – and stored them on hidden networks. computers. Late every night, these hidden computers would connect to servers in Shanghai and download the files containing these recordings for later analysis by the Chinese secret service.

AU authorities brought in security experts from Algeria (in North Africa) to sweep the entire headquarters for potential bugs, The world said, leading to the discovery of hidden microphones in offices and elsewhere, which were later removed.

It was also discovered that the computer systems supplied by China to the AU headquarters were also connecting at night to servers in Shanghai and downloading the files to the AU computers in the possession of the Chinese spy services. Subsequently, the AU authorities removed the computer systems and replaced them with new, bug-free ones; the AU politely declined a Chinese offer to configure the replacement system.

The world alleged that the AU then covered up the hack to protect Chinese investments in the mainland.

It brings to mind the old story of how the Greeks defeated the army of Troy and captured their city, leaving behind a huge wooden horse as a gift and pretending to ride away in defeat. The Trojans rolled the huge horse inside their city, but that night a platoon of elite Greek troops hidden inside the horse’s belly, emerged and opened the gates of the town, allowing the main force (which had returned under cover of night) to capture and loot the town.

The famous sentence that has come down to us from this incident is: “Beware of Greeks who carry gifts”.

Many African governments quickly accepted the generous gifts offered by the Chinese government. During my recent trip to Niamey in Niger and Ouagadougou in Burkina Faso, I saw new Chinese-built bridges and roads and other infrastructure.

So many countries are addicted to cheap loans, all of which have to be repaid; and if they can’t repay, well….

The “gift” of a new building for the AU headquarters was a true modern-day Trojan horse, allowing donors to invade through “backdoors” embedded in the computer software that was part of the gift.

The lesson for us is that we should be wary of Greeks bringing unsolicited gifts and proposals.

Could this African anecdote have any relevance to us here in Jamaica?

The same country that placed insects in the walls of the AU Headquarters in Addis Ababa during construction is building our brand new Ministry of Foreign Affairs Headquarters, where delicate negotiations and discussions will take place.

The same country has also submitted an unsolicited proposal for the construction of a new Jamaican parliament building, with offices for parliamentarians, and where private and confidential discussions will take place in hallways and caucus rooms.

Is there cause for concern? You tell me!

I was going to say I was hoping the special branch (counterintelligence unit) of the Jamaican police force has the ability to scan our new foreign affairs building for bugs, but I remembered it A few years ago, the government abolished the Branch special force.

I hope the Jamaica Defense Force Military Intelligence Unit will be up to the task.

Or maybe we’ll have to bring in security experts from the US or the UK (or Israel?) to do the sweeping; but then how will we know if they won’t just plant their own insects.

Peter Espout is a sociologist and development scientist. Email your comments to columns@gleanerjm.com.