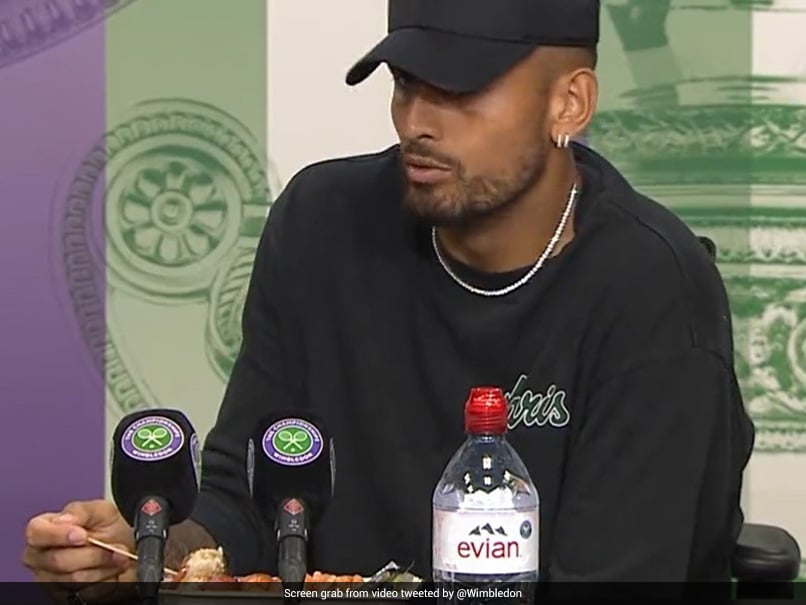 Nick Kyrgios is a mercurial tennis player both on and off the court. The Australian tennis star has often been embroiled in controversy for his antics. He often got in trouble for letting his emotions out. He often had feuds with chair umpires and rival players. Now, in a recent video released by Wimbledon, Kyrgios can be seen eating sushi during a press conference ahead of his match. It is very unusual for a player in any sport to eat during press meetings.

Wimbledon posted the video with a cheeky caption: “No chopsticks for your sushi,
@NickKyrgios?”

Earlier, Nick Kyrgios prevailed in a fiery five-setter at Wimbledon on Tuesday and blasted ‘disrespect’ from fans as well as ’90-year-old’ officials before admitting he spat at the one of his executioners in the crowd.

But the dark side of the 27-year-old audience was also in the spotlight.

Even from the first set on a crowded and noisy Court Three, Kyrgios demanded that some fans be removed.

“There were a few people who weren’t shy about criticizing me – this one’s for you,” said the 40th-ranked player. “You know who you are.”

In a subsequent press conference, Kyrgios jousted with reporters as he spoke out about the abuse he says he experiences daily, both on and off the pitch.

“Just pure disrespect, whatever,” said Kyrgios, who revealed a fan used a swear word to describe his acting.

“Have you ever been to a supermarket and started scolding someone for scanning the groceries? No. So why do they do it when I’m at Wimbledon? Why?”

During his tense press conference, Kyrgios himself was accused of disrespecting the linesmen.

He had been heard saying ’90 year olds can’t see the ball’.

“No, I said most referees are older, and I just don’t think that’s ideal when you’re playing a sport with such small margins,” Kyrgios explained.

“Young people actually have better eyesight. When you’re playing a sport for hundreds and thousands of dollars, don’t you think we should have people who are really willing to get the ball in or out?

Adding to his displeasure with part of the crowd, Kyrgios also called a linesman “a snitch with no fans”.

“I didn’t do anything and she went to the referee and said something to him that I didn’t say,” Kyrgios said.

“She found it relevant to run to the referee at 30 and get people talking about her.”

Kyrgios also admitted that while celebrating his victory, he spat in the direction of a spectator.

He said it was a deliberate response.

“Yes. I wouldn’t do that to someone who supported me.”

Kyrgios, who stunned Rafael Nadal on his way to the quarter-finals at the All England Club in 2014, arrived at the tournament after semi-finals at grass-court events in Stuttgart and Halle.

In Stuttgart, he claimed to have been the victim of racist abuse.

“I’ve been dealing with hate and negativity for a long time,” he said on Tuesday.

“Some viewers think there’s no more lineup. They can just say something and film it, and then they laugh about it.”