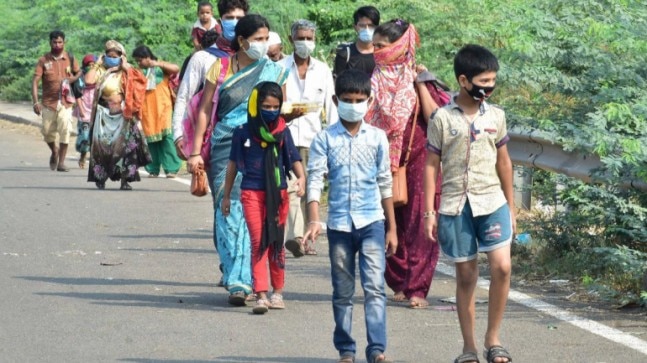 Nirmala Sitharaman’s press conference LIVE: After a boost for MSMEs, what next in the plan to restart the economy?

The Ministry of Finance announced on Thursday the second tranche of measures taken to revive the economy affected by the new coronavirus pandemic. The measures are part of the Rs 20 lakh economic package announced by Prime Minister Narendra Modi on Tuesday.

In the first batch of the economic package, the government unveiled measures amounting to around Rs 6 lakh crore in the form of easy loans, extra cash and other incentives to help businesses fight the crisis.

Separately, the government also said that PM CARES Fund Trust has decided to allocate Rs 3,100 crore for the fight against COVID-19, of which nearly Rs 2,000 crore will be earmarked for ventilators and 1 000 crores of rupees to migrant workers.

5:01 p.m.: For the middle income group for people whose income is between Rs 6 lakh and Rs 18 lakh, the government has extended the credit linked subsidy scheme until March 2021; 2.5 lakhs middle-income families to benefit in 2020-21: FM

4:57 p.m.: The government will support nearly 50 lakh of street vendors through a special credit facility of Rs 5,000 cr, the finance minister has said. The government will provide Rs 10,000 as initial working capital. Digital payments will be encouraged.

4:55 p.m.: Government announces interest subsidy of Rs 1,500 crore for MUDRA-Shishu loans. Small businesses that have taken a Shishu loan, which is Rs 50,000 maximum, will receive a 2% interest subsidy for quick recipients for 12 months: FM

4:46 p.m.: FM introduces the “one nation, one ration” card which will have national portability. The government aims to make the card available to 100% of the PDS population by March 2021.

4:40 p.m.: Provision of free food grains to migrants for the next two months. Previously the government announced free cereals for the poor who fell under the National Food Security Act but now the government has now announced Rs 3,500 cr to ensure free supply of food cereals to migrant workers who do not hold no ration card. The grain will be distributed by the states.

Free supply of food grains to #Migrants for 2 months
About 8 crores of migrants to benefit
Rs. 3500 Crore will be spent on this intervention for 2 months: @nsitharaman

4:38 p.m.: We are working to make the right to the minimum wage universal (which now only applies to 30% of workers). Eliminate regional disparities in minimum wages, thanks to a national wage floor concept that can be accepted by all States: FM

4:35 p.m.: Labor codes have changed to benefit workers. Social security schemes for gig workers and platform workers. Creation of a retraining fund. Extension of ESIC coverage across India in all districts. Annual health check for employees. Portability of social benefits, announces the Minister of Finance

“The government is committed to the well-being of workers”: @nsitharaman to #AatmaNirbharBharatPackage Press briefing pic.twitter.com/WRSnLCnNyt

4:33 p.m.: The Minister of Finance announces MGNREGA’s support for returning migrants. More than 14.6 crore person-days of MNREGA have been generated till yesterday, which is 40-50% more than last May. Work was offered to 2.33 crore wage seekers in 1.87 lakh gram panchayats. 4:30 p.m.: 12,000 SHGs produced over 3 million masks and 1.2 lakh liters of sanitizers during the Covid-19 period. Revolving funds are provided to SHGs through the PAISA portal. 7,200 new self-help groups for the urban poor have been formed in the past two months: FM

4:25 p.m.: The government has authorized state governments to use the SDRF to set up shelter for migrants and provide them with food and water etc. . We are aware, we assist migrants and give to them in different ways: FM Nirmala Sitharaman. 4:20 p.m.: Cash support to farmers and the rural economy has happened even in the past two months. 62 lakh farmers benefited from loans totaling Rs 86,600 cr. Refinancing of Rs 29,000 cr provided by NABARD to cooperative banks and regional rural banks in March 2020. Support of Rs 4,200 cr provided under the rural infrastructure fund to the states in March for rural infrastructure. Also, working capital limit of Rs 6700 cr sanctioned for purchase of agricultural produce from state government entities since March: Finance Minister

4:10 p.m.: The interest subsidy and prompt repayment incentive for agricultural loans due from March 1 have been extended until May 31. About 3 crore marginal farmers had received loans worth Rs 4 lakh crore at low rates. They also received a moratorium from RBI: FM Nirmala Sitharaman

4:07 p.m.: The Minister of Finance asks the media and citizens to be patient with announcements. “If we are not talking about a certain element today, it does not mean that the government has forgotten a particular segment, other initiatives are announced,” said FM Sitharaman.

4:05 p.m.: Finance Minister Nirmala Sitharaman says the 2nd tranche of the economic stimulus package will benefit migrant workers, street vendors and small farmers. The ministry is today announcing nine economic measures, including nine announcements – three for migrants, one for petty traders, one for street vendors, one for housing, one for job creation in the tribal sector and two for small farmers.

Today’s initiatives include a total of 9 actions:
3 related to migrant workers
1 related to street vendors
Small traders
Independents
2 on small farmers
1 on housing

3:55 p.m.: Din pushes for an economic package to end the misery of migrants. Thousands of migrant workers have also been left jobless and homeless due to the pandemic, especially after the lockdown came into force on March 25. While special trains and buses have been organized for them in recent weeks and continue to operate to help them reach their places of origin, thousands of them have had to walk or even hide in trucks and containers. to reach their destinations.

3:50 p.m.: Prime Minister Modi said on Wednesday that the first set of measures announced by the finance minister will improve liquidity, empower entrepreneurs and boost their competitiveness, while addressing various issues faced by businesses, especially MSMEs.

3:45 p.m.: In the first part of the announcements, Finance Minister Nirmala Sitharaman announced a series of measures to help MSMEs affected by the lockdown, which is now expected to be extended beyond May 17. She had also announced a reduction in the contribution of employees and companies to the EPF for three months and a 25% reduction in TDS and TCS tariffs to put more money in people’s pockets. The measures announced on Wednesday also included relief for the real estate sector, nightclubs and entrepreneurs.