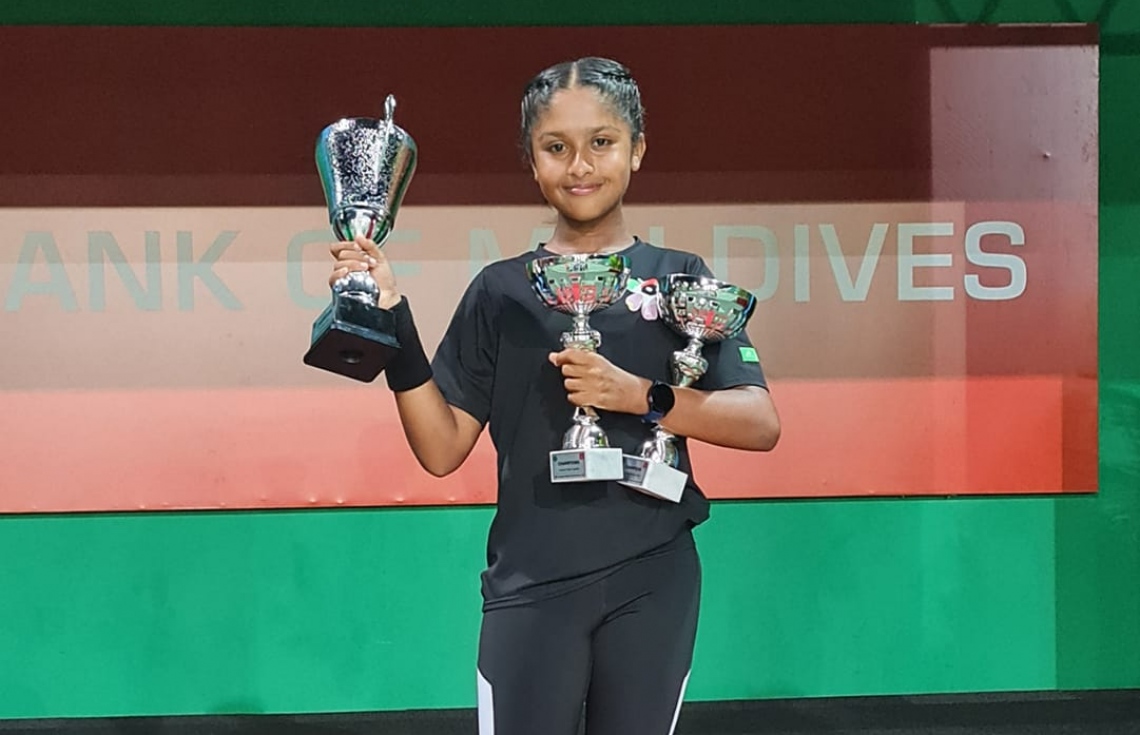 She defeated Nayara Usama Ali in the final to win the Women’s Singles Championship. She competed against Aishath Yumnu Niyaz and Mishal Mohamed along with Layaan Mohamed Shamin to secure the women’s doubles champions. She won the junior singles championship by defeating Aisha Zoya Ali Suzain.

Naba, who has been practicing in Bangalore, India since December last year, came to the Maldives to compete in this and another international competition. She has already triumphed in a world competition, and she hopes to do so again.

Naba’s mother, Dr. Nazma Hameed, said that at the last event, Naba was the only Maldivian to win a trophy; but, this time, the hope is that other Maldivians will win alongside Naba.

Naba won the All India Tennis Association Under-14 tournament in Bangalore last May. In addition to players from Bangalore, players from other cities in Karnataka and five other states in India participated in the tournament.

Naba had also won three of the four international junior tournaments held in Sri Lanka. Naba, who won the Maldives Sports Award held in March, said his long-term goal is to compete in a Grand Slam tennis tournament. His other goals, according to his father, Dr. Ahmed Nishan, include winning a medal at the Indian Ocean Island Games and the South Asian Games.

Naba, who is following a one-year training program at one of India’s top academies. The academy is established in Bangalore by former world number one badminton player Prakash Padukone and former world best batsman Rahul Dravid.

Dr. Nazma, who had worked as a senior gynecologist at ADK Hospital, moved to Bangalore to support her daughter in her training. Naba follows five hours of training per day, three hours in the morning and two hours in the evening. Naba currently has his schooling online.

Tennis star Boris Becker to be deported from UK to Germany