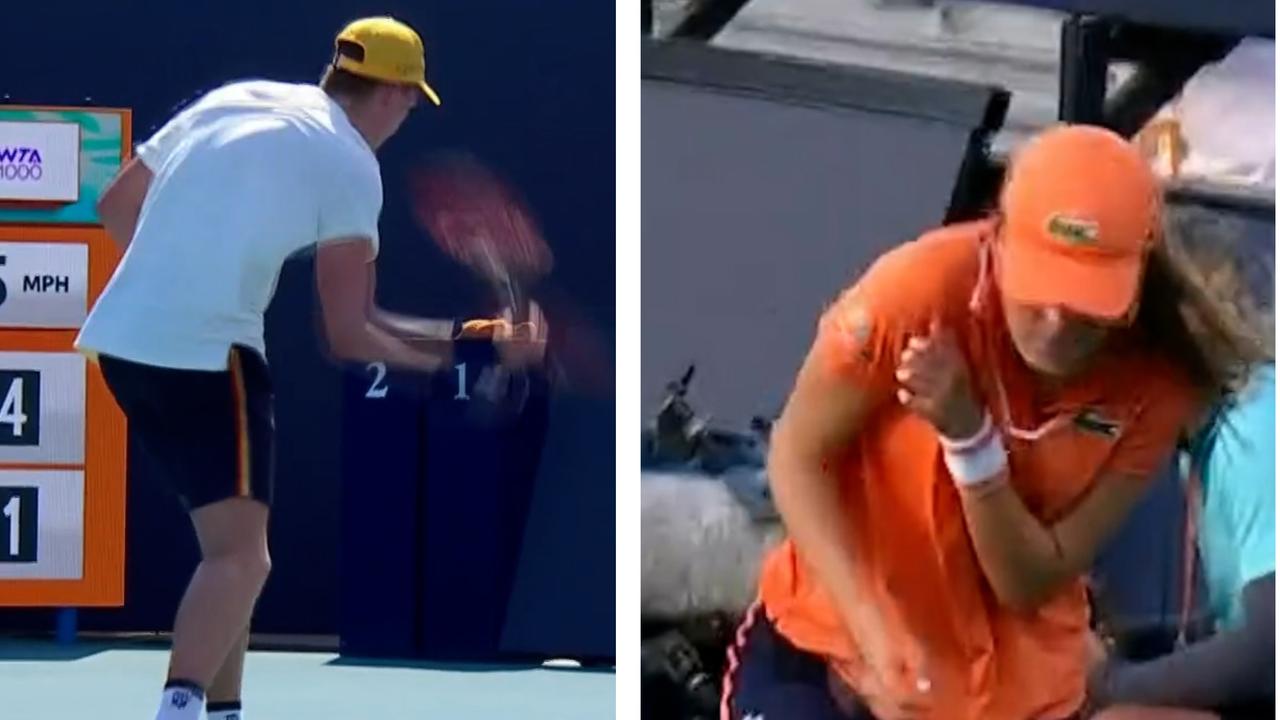 Barely a week after Nick Kyrgios nearly hit a ballboy after hammering his racquet to the ground, two more ugly incidents involving tennis stars and near-misses with ballkids occurred at the Miami Open.

Australian star Jordan Thompson and American Jenson Brooksby are the latest to find themselves in the crosshairs of the tennis world.

In the third set of his first-round match against Argentina’s Federico Coria, Brooksby – who led 4-1 in the final set – threw his racquet onto the court which slipped and forced a ball boy to jump out of the way. way to avoid having his ankles hit.

Brooksby appeared to show little remorse for his actions, simply taking the racket back from the ball boy who held it out for the American to grab.

He finally got the job done, winning 3-6, 6-2, 6-3, but despite the scoreboard win, he certainly didn’t score any new fans for that egregious mishap.

‘No!’: Tigers star steps in as Barty code-switching discussion swirls after shock retirement

In Thompson’s match against 2008 Australian Open finalist Jo-Wilfried Tsonga, he had a mental outburst in the third set when, after a point, he decided to grab the ball and hammer it into the sky, leaving a ballerina, who stood no further than a meter away, to slip away.

Thompson won 6-7 (1-7), 6-4, 6-4, but again it highlighted a problem in tennis that is quickly becoming a negative talking point in the sport.

Discussing the Brooksby incident, former tennis player Patrick McEnroe tweeted: “Seriously what is it going to take… bloodshed… to properly punish a tennis player. It is absolutely absurd.

New York Times tennis correspondent Christopher Clarey wrote, “This has to stop. The more you let it slide or slap it on the wrist, the more it will rise.

All of the shocking moments of aggression occurred after German star Alexander Zverev escaped relatively unscathed after smashing his racket into the referee’s chair multiple times at the Acapulco Open in February.

Zverev lost his temper after he and his doubles partner Marcelo Melo of Brazil lost 6-2, 4-6, 10-6 to Britain’s Lloyd Glasspool and Finn Harri Heliovaara.

The German kicked the referee’s chair three times before sitting down, then jumping up again to shout more at the official and kick the chair another time for good measure.

The ATP handed down a suspended sentence of eight weeks suspension and a $25,000 fine, a sentence that the sporting world has widely condemned as too lenient.