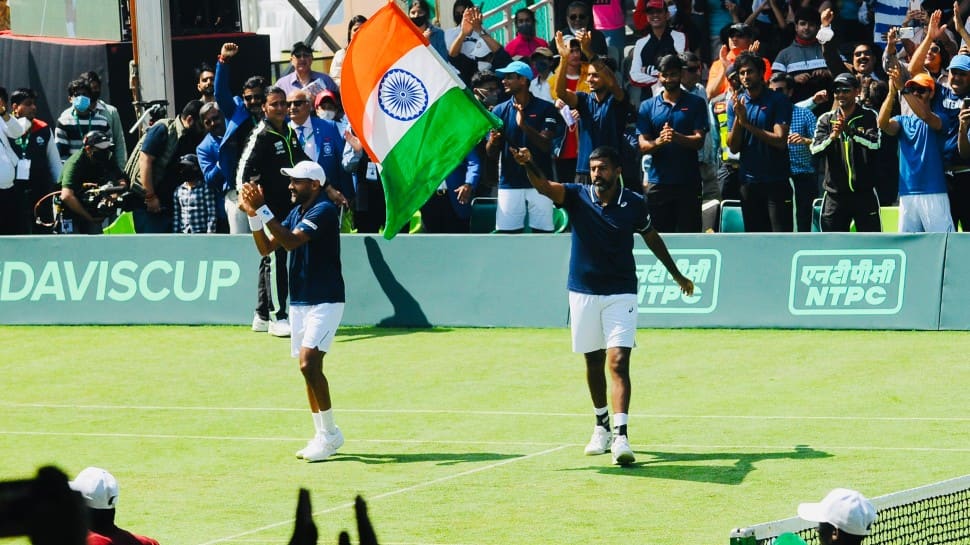 Indian pair of Rohan Bopanna and Divij Sharan beat Denmark’s Frederik Nielsen and Mikael Torpegaard 6-7 (3-7), 6-4, 7-6 (7-4) in an intense World Group Qualifiers doubles match 1 of the Davis Cup at the Delhi Gymkhana Club here on Saturday. With this win, India took an unassailable 3-0 lead against the Danish team.

On March 4, Ramkumar Ramanathan and Yuki Bhambri had given the hosts a full 2-0 lead by beating Christian Sigsgaard and Mikael Torpegaard respectively.

World No. 32 in doubles Bopanna has shown why he is the best doubles player in the country. He seized the opportunity when it mattered most, grabbing crucial points with his drop shots on the net. However, world No. 142 in doubles, Divij looked a bit shaky at first but then got into the rhythm inspired by his partner.

#Davis Cup : INDIA win 3-0 against DENMARK… Rohan Bopanna & Divij Sharan win the crucial double in a thrilling 3 set (after losing the 1st set) and win the World Group 1 playoff match against #Denmark & qualify for World Group 1 to be played in September. #Tennis pic.twitter.com/Wx4mzk9vi4

Divij, 35, played well in the third set and carried the attack to the opponent.

Earlier, Bopanna started the proceedings with three aces in the opener of the game. The winner of Adelaide’s 2022 doubles titles served with ease, capturing points against the lower-ranked Danish players. At the same time, Denmark also held their serve with powerful backhand shots from the baseline.

World No. 98 in doubles, Nielsen showed his class on the net, nearly thwarting Bopanna’s attacking play and ensuring the Indians had to fight for every point in the opening set. However, the most experienced player in the Indian team, Bopanna with his agility, athleticism and net reflexes did not let Denmark off the hook.

It was the moment in the match where two former rivals, Bopanna and Nielsen, fought a fierce net battle in which Bopanna emerged victorious and tied the score 6-6. However, all their hard work was in vain when India lost the first set of the tie-break 7-6 (7-3).

In the second set, Bopanna, who won the men’s doubles title at the Countrywide Classic in Los Angeles with partner Eric Butorac of America in 2008, and Divij simultaneously broke Torpegaard and Nielsen’s serve at regular intervals by taking a 5-2 lead. After that, the Indian duo didn’t give the Danish pair many chances and won the set 6-4.

In the third set, with the score at 2-2, India had the advantage to break Frederik’s serve, but Divij’s backhand cross shot missed.

In the next game, 42-year-old Bopanna, who was at his best with a volley and net bunts, made it 3-3 with an ace. It was a fierce battle between the two teams when the score showed 5-4.

Bopanna, who suddenly became more attacking on the net, held his serve but Frederik made it 6-5 in the next game. Denmark also extended the third set until the tiebreaker.

However, the Nielsen-Torpegaard pair lost momentum to concede the tiebreaker 7-4 and ultimately the game.

A penguin named after tennis star Raducanu travels for love