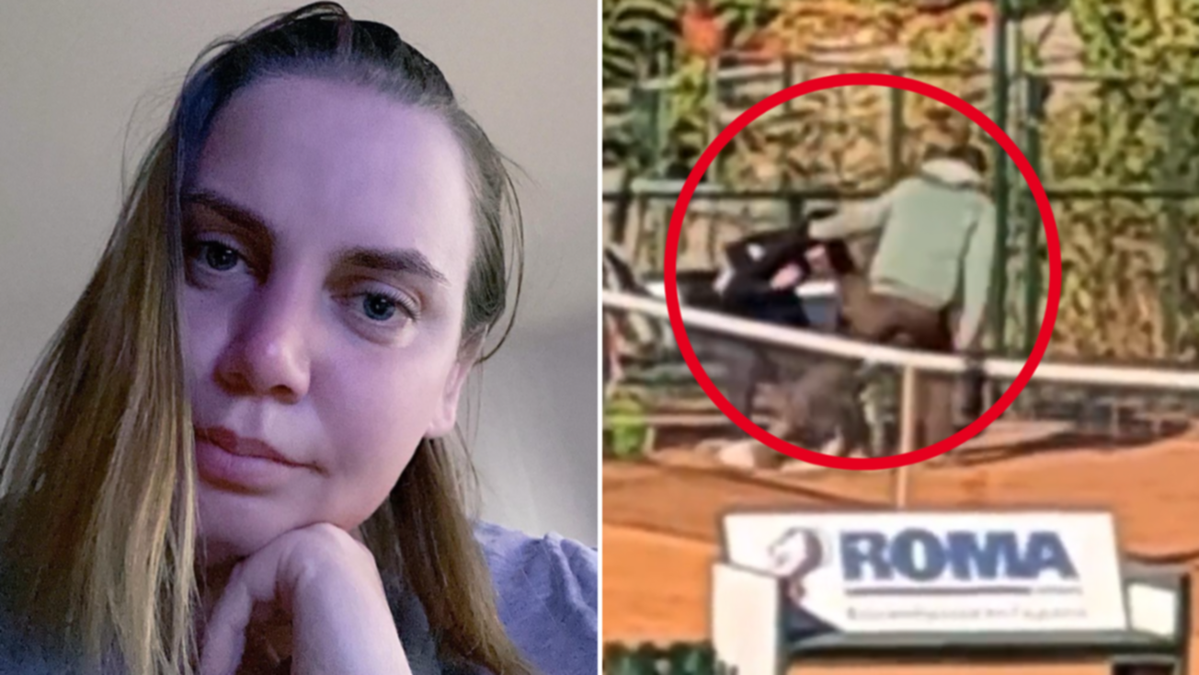 WATCH THE VIDEO ABOVE: Distressing footage emerges of a young tennis player being assaulted

For more celebrity news and videos, check out Celebrity >>

In the video, believed to have been filmed in a court in Serbia, the man – apparently the girl’s father – kicks and punches her before dragging her to the ground.

Croatian actor Igor Jurić shared the vision on social media on Saturday, prompting a group of tennis stars to condemn the attack and call on the International Tennis Federation to investigate.

“This girl is going to be broken forever,” Australian Daria Saville wrote on Twitter.

Now fellow Australian Jelena Dokic has added to the chorus of condemnation.

Sharing a long and moving Instagram post, she said she felt sick and “vomited” after seeing the footage.

“I am heartbroken after watching this,” she wrote.

She said it was a “normal day” for many young tennis players suffering from violent and abusive coaches, who were often parents or family members.

“Do you think that’s brutal?” It is, but it is a normal day for many of us who have been or are being abused, especially in childhood,” she wrote.

“Hitting us, pulling our ears, spitting in our faces, throwing us to the ground, punching and kicking us.

“Just another day for us and that includes this 14 year old girl.

“Imagine what happens behind closed doors. It’s even worse.

“That’s exactly why I talked about it and wrote about it.”

Dokic chronicled her own experience in the book Unbreakable, exposing the abusive treatment she endured at the hands of her father Damir.

“I’ve always said I’m neither the first nor the last to experience this, but my question now is, have things changed in the way our sport and our society deal with this?” she wrote in her message.

“I’m glad this monster was caught on camera, but people watch this and do nothing until it starts kicking it on the ground.”

She also called on the media to “do more”.

“Our sport and our players, especially those with a big platform, need to raise awareness about this.

“And the clubs, the federations, the governing bodies must do their part.

“That’s where they need to step up now.”

Dokic says the media needs to stop gossiping about players dating and start focusing on the issues raised by the footage.

“Who will talk about her and protect her? she wrote.

“I’ll tell you from personal experience. Nobody.

“I just hope this time someone will help because she’s scared and she’s broken and she’ll be traumatized forever.”

Finally, Dokic said that “lives have been lost because of this kind of behavior that we don’t talk about enough.”

“Some do not survive, some are killed and some commit suicide,” she wrote.

“You just don’t hear about it. So it’s time to make some noise.

Dokic concluded his post with the hashtags: #childabuse, #childabuseawareness and #domesticviolence.

Her impassioned post drew hundreds of comments of support and questions about what people could do to help.

“I was thinking of you when I saw this,” one follower wrote.

“It must have been extremely difficult for you to see.

“I’m glad we have wonderful people like you speaking up.”

“Thank you, Jelena, for posting this,” wrote another.

“You are so right, everyone must condemn this behavior.”

The Belgrade Tennis Association condemned the video, with local media reporting that the tennis player is only 14 years old.

The Serbian Interior Ministry announced on Sunday that police in Palilula had arrested a Chinese citizen following the incident.

“After a video of him (allegedly) beating his 14-year-old daughter appeared in the media, the police immediately took all measures and actions within their jurisdiction and quickly identified the suspect,” he said. said in a statement. translated statement.

“(The man) has been ordered to be detained for up to 48 hours and he will be brought to the First Prosecutor General’s Office in Belgrade with a criminal complaint.”

“We strongly condemn the violence on the tennis court that occurred during training,” he said in a statement. translated statement on Sunday.

“We know that this is a case of (alleged) domestic violence, since the perpetrator is the father of a young tennis player.”

Advice and counseling for men concerned about their use of domestic violence: Men’s referral service1300 766 491.

Lisa Curry embarks on ‘toughest’ journey to scatter daughter’s ashes: ‘Closest to heaven I could get’