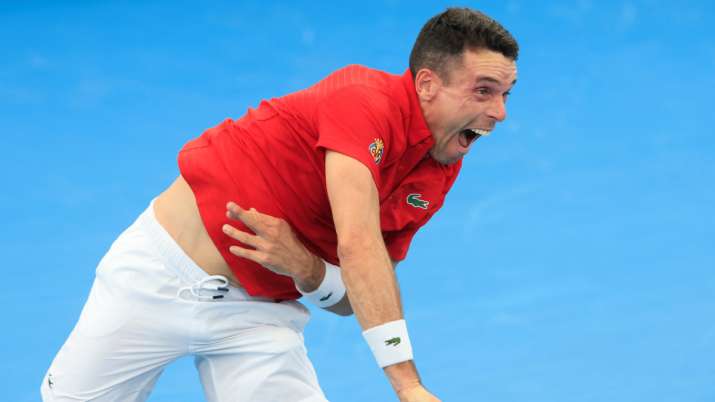 Spain, Poland and Argentina continued their momentum, beating their respective opponents 3-0 on Monday for their second consecutive victory in the team event.

“He (Metreveli) played well in the first set and things were not going my way. But I got better with each set and I’m happy I won,” said Hurkacz.

Argentina beat Greece as Federico Delbonis beat Michail Pervolorakis 7-6 (5), 6-1 and Diego Schwartzman came back from behind for a victory of 6-7 (5), 6-3, 6-3 on Stefanos Tsitsipas.

All three teams then completed their victories by winning their doubles matches. Poland and Argentina will play for a place in the semi-finals in their final group match on Wednesday. Majchrzak only needed 53 minutes to beat Bakshi.

“I was trying to move (Bakshi) and I think that was the key to the game,” said Majchrzak, who is coached by former world seventh Joakim Nystrom. “He (Nystrom) gives me a lot of confidence and a lot of calm in my tennis so that I can feel I’m improving.

“We’re working on (developing a game on all terrains) but in a way that doesn’t interrupt my basic game. We’ll take it from practice to games, but it takes time.”

Chile remained in contention for a place in the semi-finals with a 2-1 victory over Serbia. Filip Krajinov gave Serbia the lead by beating Alejandro Tabilo 6-4, 3-6, 7-6 (5), but Chile shot, even when Dusan Lajovic retired in the third set of his game. against Cristian Garin.

This set up the decisive doubles match where Tabilo and Tomas Barrios Vera beat Nikola Cacic and Matej Sabanov 6-4, 3-6, 10-7.

“It was a great game with Krajinovic and I just needed to get the motivation back, once Cristian won his game,” Tabilo said after his doubles victory.

The result left both sides with a 1-1 record heading into Wednesday’s final group matches, where Chile face Norway and Serbia face Spain. The four group winners of the 16-team tournament advance to the semi-finals on Friday and Saturday, with the winners meeting in the final on Sunday.