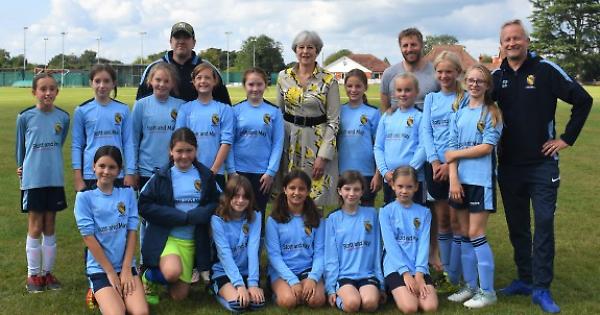 Ex-PM tells footballers to continue like a tennis star

She was speaking at the annual awards ceremony at the Wargrave Women and Girls’ Football Club, of which she is the president.

The ceremony took place at the village recreation grounds ahead of the start of the new season, after being delayed from May due to covid restrictions.

It brought together the teams, coaches and families of the players and included a mini tournament and a barbecue.

Ms May, who is MP for Maidenhead, told them, “Well done to all the volunteers, parents and everyone who made sure things could continue.

“I’ve heard that you’ve grown up and grown up and the problem with the club is that it gets so much interest.”

Speaking to young players, she said it was important to have goals and ambition.

“I think women’s sport is so important,” Ms. May said. “I hope you saw in New York what young women can do with Emma Raducanu winning the US Open at the age of 18 when she was only doing her A-Levels three months ago. and you never know where you are going to end up in your athletic career because we might see some of the girls here representing England in football at some point Keep enjoying your football.

The club, now in their 21st year, are England’s second-largest women’s football club and there is a waiting list in many age groups.

It has a maximum of 400 players due to capacity restrictions on the recreation field and for training on the 3G field at Piggott School.

The club person award went to Coaching Manager Andy Caldwell, while the Golden Boot award was shared by Jess Reed and Abigail Dobson, who scored 15 goals each.

Mr Caldwell said: “Our annual meeting, awards and tournament are usually around May, but due to the restrictions at the time and the need to minimize social interactions, we made the decision to delay our ceremony. ceremony for the 2020/21 season.

“It was the first time that we had our annual event in September and at the start of a following season. It was also the first time in 20 years that President Bob Austen was unable to host the event, but Treasurer Danny Malone took the reins and did a great job. It was a great way for everyone to start the season after the summer as a huge team and there was a great turnout.

“The club has grown significantly from around 30 players to the current 400 and that number could be even higher if we had the facilities in Wargrave to keep up with the demand.

“Our success as a club has been built on the solid foundations of sportsmanship and a benevolent and benevolent philosophy.

“We must express our gratitude to our fantastic group of coaches and assistants who have accompanied our club over the past year.”

The awards for the Players Player, Coaches Player and Most Improved Player of the Year were as follows (in order):